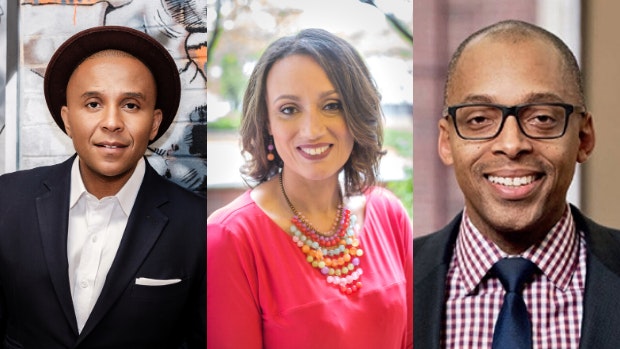 The cruel impacts of Covid-19 and recent murders of multiple black people by police have laid bare longstanding inequities of systemic racism in America. These injustices cut across criminal justice, healthcare, housing, employment, and education. Harvard historian Khalil Muhammad and Rashad Robinson of Color of Change talk with the Skillman Foundation’s Tonya Allen about a long history that led us to this moment and the rules — both written and unwritten — that have shaped these systems and cultures. Importantly, they ask: What does it look like to rewrite those rules?

Get to Know the Speakers

Khalil Gibran Muhammad is professor of History, Race and Public Policy at Harvard Kennedy School and the Suzanne Young Murray Professor at the Radcliffe Institute for Advanced Studies. He is the former Director of the Schomburg Center for Research in Black Culture, a division of the New York Public Library and the world’s leading library and archive of global black history. Before leading the Schomburg Center, Khalil was an Associate Professor at Indiana University. Khalil’s scholarship examines the broad intersections of race, democracy, inequality and criminal justice in modern U.S. history.

Tonya Allen is president & CEO of The Skillman Foundation. Her two-decade-long career has centered on pursuing, executing and investing in ideas that improve her hometown of Detroit and increase opportunities for its people, particularly its children, who live in under-resourced communities. Allen has been instrumental in many successful philanthropic, government and community initiatives, including: the 11-year, $120-million Good Neighborhoods Initiative; co-chairing the Coalition for the Future of Detroit Schoolchildren and Launch Michigan; and serving as a leader in the boys and men of color field.

Sign up to receive our weekly newsletter, Aspen Ideas Now, delivered to your inbox.